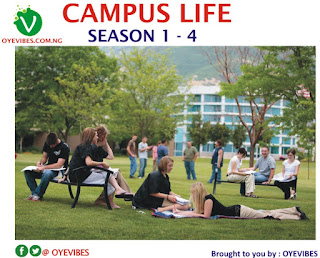 CAMPUS LIFE
Season 3 EP 2
Joseph was arrested and detained by the police for kidnapping and other related offences. Meanwhile Nike's Father, Honourable George Daniels came to the police station and asked Joseph if he had a hand in this matter. Joseph said "No sir, being surprised that the Honourable could ask him a question like that instead of the Honourable to shout or slap him. The Honourable said "Funmi came and told me that she heard when you were talking to some boys about kidnapping and that she told Nike my daughter about it but she said no because she trust you. She said you are the one that masterminded the kidnap and that you were planning to kill her in the hostel with a gun, how true is that? " "I don't know anything about it sir, I swear with my life sir " said Joseph. "You will rot in jail if you have a hand in my daughter's kidnap but if not, you will be freed but for now, you will still be detained because investigation is on, good day " said the Honourable and walked out. Joseph started crying  uncontrollably, regretting that he followed the advice of his friend Michael and how he was warned from home to face his studies and nothing else.
CLICK HERE TO JOIN OYEVIBES FACEBOOK GROUP
Funmi was happy that she had got the two of them suffering in agony. Meanwhile Lawal's Father is an Herbalist, so she went to see her Father and told her Father that she is interested in a guy called Joseph and that she would love to have him as her future husband. So her Father asked "what do you want me to do for you?" "Papa, I want you to kill my coursemate Funmi, who wants to have this guy and then make Nike my classmate run mad because she is in a relationship with that guy, that is what I want Papa". Her Father agreed to do it for her but she must bring the picture of Funmi who she want dead and Nike who she want to run mad to him. Lawal said "I don't have their picture Papa" her Father said "It is either you get their picture or you get their Mothers name " apart from that, nothing else can be done. Because of the love she had for Joseph, she would do anything just to have him to herself.
As Lawal was going back to her hostel, she was pondering over what her father told her and how Nike had been kidnapped and Joseph being detained in the police custody, as she entered the room, she heard Funmi in the bathroom telling some boys that they should torture Nike very well. As Funmi got out of the bathroom, she then discovered that Lawal had heard her conversation on the phone. So Lawal said "so you are the one behind the arrest of Joseph and kidnap of Nike, you are such a wicked fellow and I will report to honourable what you did". Funmi knelt down and begged Lawal to name her price, that she would pay, but she shouldn't expose her acts, Lawal got angry and shouted at Funmi saying no, no, no but she then remembered that she need either Funmi's picture or her mother's name for what she wanted to do. Funmi begged Lawal to pls cover her up, Lawal said 'yes but on one condition, you will give me your picture because I will need it for my Project in Applied Arts. Funmi said "that's simple, is that all". "Yes that's all" replied Lawal in which Funmi didn't knew her motive but thought she needed her picture for just a project.