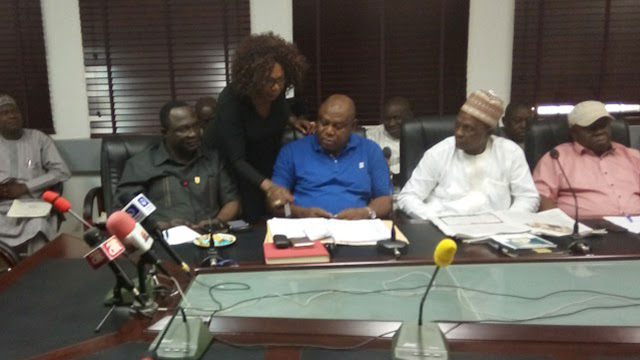 JOINT Action Committee, JAC, of the non teaching staff in the Universities, has directed its branches to mobilise its members for a nationwide protest starting on Monday 15th July, 2019, over the Federal Government refusal to recall sacked workers of Staff Schools and the alleged discriminatory attitude of government against non teaching staff.

JAC, comprising the Senior Staff Association of Nigerian Universities, SSANU, and the Non Academic Staff Union of Educational and Associated Institutions, NASU, at its meeting in Abuja on Friday, also decried exclusion of its members from the workings of the National University Pension Company (NUPENCO) solely operated by the Academic Staff Union of Universities (ASUU. It further frowned at the alleged preferential treatment extended to ASUU by the Federal Government as seen in the allocation of 80 percent of monies released leaving the non academic staff with 20 percent. In a resolution reached after its meeting, read by the Chairman of JAC and National President of SSANU, Comrade Samson Ugwoke, the non teaching university workers rejected the 20 percent Earned Allowance allocated to the three non teaching unions
“We call and demand that government should release as a matter of urgency, N30 billion for non teaching staff

“JAC has approved protests from the branches, protests at the zonal levels of our unions and mother of all protests in Abuja for three days, before a deadline is given to the government for the mother of all strikes that will follow. The protest will commence on Monday 15th July 2019,” he said

Title : SSANU, NASU Declares Nationwide Protest Ahead of Strike
Description : JOINT Action Committee, JAC, of the non teaching staff in the Universities, has directed its branches to mobilise its members for a natio...
Rating : 5
Related Posts: News

0 Response to "SSANU, NASU Declares Nationwide Protest Ahead of Strike"