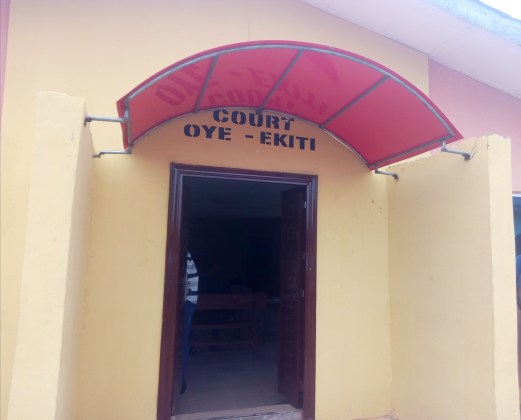 The Magistrate court sitting in Oye-Ekiti has adjourned the case of two students of the Federal University Oye-Ekiti who were arrested and charged by Dr. Chinedu Abrifor, a lecturer in the department of Criminology.

It was gathered that the two persons: Eze Christopher, a 200 level student of the department of Criminology and Daramola Dotun who until recently was a student of the same department were arrested on the count of alleged threat to life made to Dr. Chinedu Abrifor via a text message.

At the court hearing, the prosecutor, Sergeant Famodimu Adeniyi, requested that the case be adjourned because investigation is currently on and that detectives are at a state in the nation to further unravel the culprits.

This shows that it has not been clearly ascertained that the two accused are the exact culprits that sent the threat message to the lecturer.

Following the request for adjournment, the attorney for Eze Christopher, the first defendant, asked for bail while the attorney for the second defendant, Daramola Dotun, aligns self with the first attorney’s application on the further grounds that the prosecution is based on “mere suspicion”.

The Magistrate presiding over the case granted the application for bail on the terms that the accused are to pay a sum of 100,000 each. Also, they are to provide two sureties, one of whom must be resident within the jurisdiction of the court while the other must be resident  within Ekiti state.

Following the suggestion of the attorneys of the defendants, the case was therefore adjourned to 29th September, 2019.

More details will be released soon.