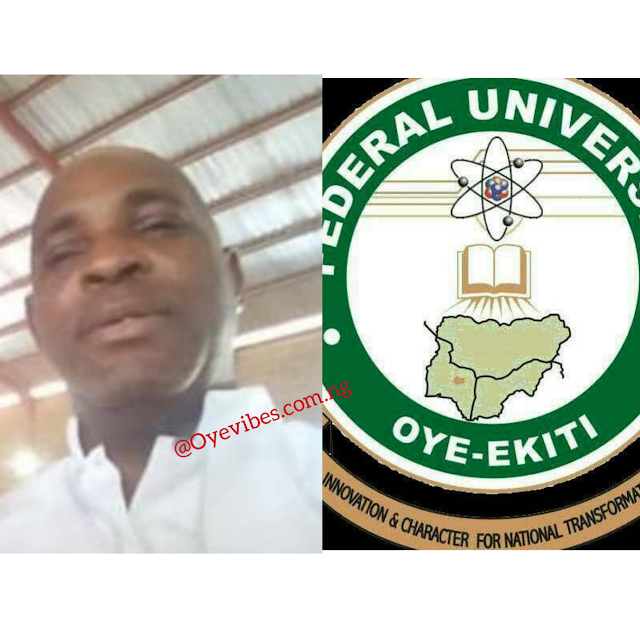 Professor Adewole Atere of the Federal University, Oye-Ekiti, Ekiti State (FUOYE), has impregnated one of his teenage student, Precious Azuka, of the Department of Criminology.
Prof. Atere is said to be a former head of the Department of Criminology.
Based on the info Sent to Oyevibes Team, Prof. Azuka met the professor in her first semester at the university in March 2017. She was known to be 16 at the time of the meeting.
Image result for Professor Adewole Atere
Atere’s romantic interest for the teenage student was revealed to her by one of his subordinates in the department, Chinedu Arbrifor.
A Reporter told Oyevibes that audio and documentary records of evidence show that Dr Abrifor told Azuka at that time that she was “mature enough” for Atere.
Azuka got pregnant in less than two months into the relationship.
She told a committee set up by the acting Dean of Student’s Affairs at the time, E.O Adeyemi, that after her attempt to abort the pregnancy proved abortive, she involved a friend called Priscilla who took her to an unnamed laboratory official at Oye Ekiti General Hospital.
“The laboratory official introduced me to Dr Dada who eventually assisted me to remove the pregnancy on Wed, July 26,” Azuka said. 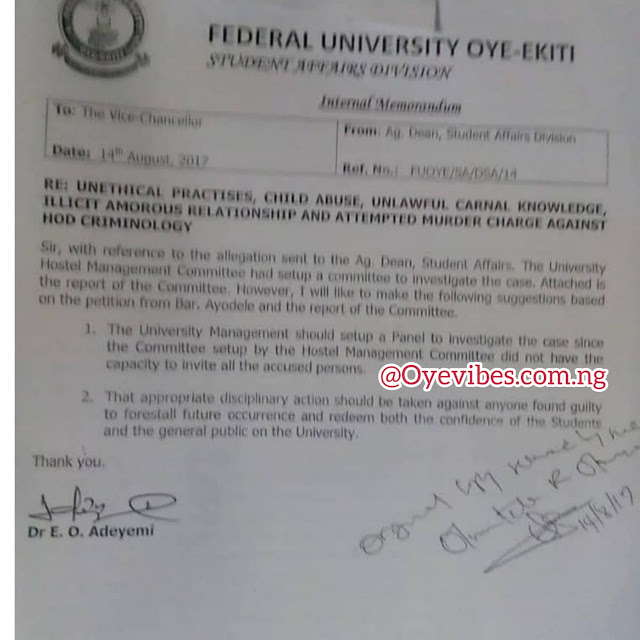 She later successfully removed the pregnancy on the 27th of July.
The university’s cleaners found the foetus wrapped in a cellophane bag while cleaning the hostel.
Azuka was found in pains in her hostel on that day and was taken to the University’s clinic. She was discharged the subsequent day, July 28, 2017.
Olaolu Ayodele, a legal practitioner who is based in Ado-Ekiti filed a petition on the incident to Adeyemi who launched a fact-finding committee.
The parties involved then investigated by the committee which learnt that Azuka’s boyfriend, Kayode Fasanya, whom she began dating in January 2017, had broken the relationship when he found out the professor’s interest on Azuka.
Prof Atere resigned his appointment immediately the matter became disturbing, He was offered another appointment at Olabisi Onabanjo University (OOU), Ago-Iwoye, Ogun state.
Vice-Chancellor of Fuoye, Prof. Kayode Soremekun, Said Prof Atere could not be charged because he left the service of FUOYE.

The VC said FUOYE’s law at the time permitted resignation without notifying the school.
“I am am totally unaware of any report by any committee originated by any dean. I have told you why we could not act. And if I may ask, why is this matter just been raise now? This matter happened two years ago now,” Prof. Soremekun said.
When reached out to, Atere denied involvement in the matter.
Azuka, however, insisted that the professor was responsible for the pregnancy, adding that she had got back with her boyfriend.