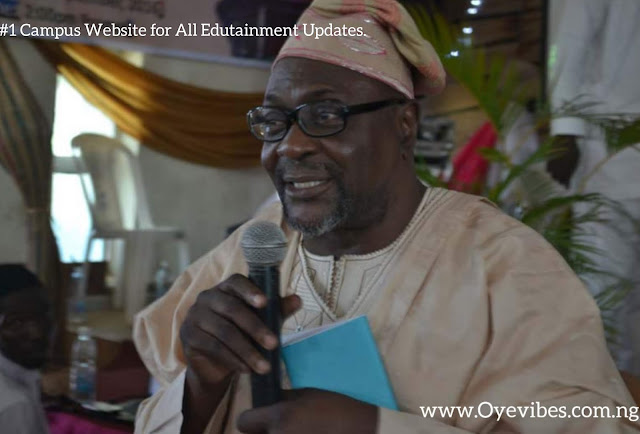 THE ACADEMIC Staff Union of Universities (Union of Universities (ASUU), Akure Zone, has accused Kayode Soremekun, Vice-Chancellor of the Federal University of Oye-Ekiti (FUOYE), of deceit, cover-up of academic fraud, gross violation of university laws, among other wrongdoings.
It said this in a statement written in response to remarks made by Soremekun during an interview with The Guardian Newspaper published on Sunday.
“In the ’80s and ’90s when the compensation system was very poor, ASUU was very compelling and very necessary… But at the moment, there are some form of perennial faceoff between the unions on one hand and the management on the other hand and this is not good for the system,” the Vice-Chancellor had said.
“Moreover, some ASUU members think that they can just get away with anything in the name of ASUU activism. Whereas, the original members of the ASUU that we know stood for a fearless and honest interrogation of reality, but that is no longer the case.”
He also accused prominent members of ASUU of embarking on “short-run personal reliefs” and “hustling” for contracts from his school’s head of procurement.
Reacting, the staff union accused Soremekun of gross ineptitude and administrative impunity, adding that the “interview was carefully tailored with lies to mislead the general public”.
Its statement, obtained by The ICIR, was signed by Olu Olufayo, zonal coordinator of ASUU, Akure Zone; Adeola Egbedokun, chairperson of ASUU, OAU; Yinka Awopetu, chairperson of ASUU, FUTA; Kayode Arogundade, chairperson of ASUU, EKSU; and Akinyemi Omonijo, chairperson of ASUU at FUOYE.
The union said the university management has done nothing significant to address issues it has always brought to its attention.
The management, it said, looks on as members are victimised, frauds are covered up, the university’s rules are violated, and illegal recruitment, promotions and passages are done. It also said FUOYE has inadequate facilities and the Vice-Chancellor has “illegally” retained the Acting Bursar in violation of the institution’s norms.
“The interview granted by the Vice-Chancellor was very shallow and evasive. It could best be described as disconnected ramblings of a confused personality managing the affairs of conscious individuals,” ASUU said.
ASUU, in August, had urged President Muhammadu Buhari to set up a visitation panel to investigate the crisis at the university and “correct all ills and anomalies and transform the university that both staff and students can be proud of.”
The full press release:
The leadership of the Academic Staff Union of Universities (ASUU), Akure Zone read with abject consternation, the press interview granted by Prof. Kayode Soremekun, Vice-Chancellor, Federal University, Oye-Ekiti (FUOYE) in “The Guardian Newspaper” of Sunday, 22nd September, 2019 and resolved to rouse him from somnolence to face the reality of the matters that the union has been interrogating and his gross ineptitude as a University Administrator. The said interview was carefully tailored with lies to mislead the general public as has been the trademark of the errant Vice-Chancellor.
Casting aspersion on the members of our union is a very cheap blow below the belt. We have observed that rather than engage on the issues raised by the Zone, his interview was laden with excuses – flimsy, uncoordinated, sloppy, un-academic and unintelligent. Comparing FUOYE with other public Universities is a misnomer in this case and we would like for the umpteenth time to set the records straight. The administrative impunity of the Vice-Chancellor has been catalogued in our earlier press interactions and till now, nothing significant has happened in addressing the issues.
Such impunities include victimization of our members, academic patronage and sycophancy, illegal recruitment, promotions and passages. Others include inadequate facilities; cover-up of academic fraud, licentiousness, vandalization, gross violation of University statutes and illegal retention of the Acting Bursar against University norms. Till date, the failure of the University Administration to investigate allegation of salary fraud by the Deputy Vice-Chancellor, Prof. Abayomi Sunday Fasina is still lingering.
The interview granted by the Vice-Chancellor was very shallow and evasive. It could best be described as disconnected ramblings of a confused personality managing the affairs of conscious individuals. How and why the government up till now has not sent in a visitation panel to the university is still a wonder (or is he a sacred bull?). None of the issues raised was addressed; rather he tried unintelligently to paint some of our members in bad light while saluting a few national leaders in patronage? Let Prof. Soremekun be told that he does not have the moral right nor the impetus to mention their names let alone claim to be their associates. The likes of Comrades Olorode, Fashina and Jega are far too cerebral, principled and focused to be cajoled by your frivolity. Please ply your trade elsewhere!
Our Union remains steadfast and the membership ever conscious to resist agents of the denigration like you who are power-drunk and lack any constructive focus for our ivory towers. Though a professor, it is shameful that all you profess are lies and deceit. At this juncture, we would like to ask Prof. Kayode Soremekun, to tell the general public the circumstances that surrounded his hasty retirement from the Obafemi Awolowo University (OAU), Ile-Ife and the reason behind his unceremonious exit from the University of Lagos (UNILAG). His response to the above will determine whether he deserves to occupy the position of the Vice-Chancellor.
Irrespective of the docility of the Federal Government, we shall continue to cry out to the public and remain ever vigilant as Vanguards of our ivory towers across the country. We shall continue to resist the vituperative remarks of Kayode Soremekun and his cohorts, while we continue to champion the course of a non-chaotic administrative system in FUOYE.
Finally, we want to advise that the Federal Government should take into cognisance the mental health of individuals before assigning them to positions of responsibility, especially at the ivory towers. Similarly, dubious characters should not be appointed into offices that require integrity, transparency and accountability.
Thank you

0 Response to "​All you profess are lies and deceit’… ASUU replies FUOYE VC, alleges multiple misconducts"