» News » We Are Ready For Negotiation - ASUU

We Are Ready For Negotiation - ASUU 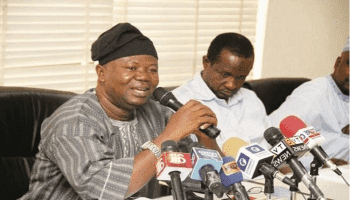 We Are Ready For Negotiation - ASUU

The Academic Staff Union of Universities (ASUU) has stated that the union had not refused an invitation from the government for negotiation during its ongoing strike and that the allegations of N800 billion by the Minister of Labour and Employment were baseless.
The ASUU National President, Prof Biodun Ogunyemi, stated these in response to the statement by the Minister of Labour and employment, Ngige

According to the President of ASUU, the union has never declined an invitation to a negotiation meeting with the government. He said what the union asked government representatives to do was to send a response to the last letter the union sent to them. " How can they claim to have invited us to a meeting without a clear agenda or any letter of invitation?" He queried.

On the N800 billion allegation, the ASUU president described the allegation as pure mischief stating that the union is thoroughly embarrassed that such reckless and baseless allegation could be credited to the Minister of Labour and Employment.


“In the first place, is ASUU responsible for the management of the payroll and personnel information in the universities? Secondly, how many of those responsible for the so-called “double payments” have the government apprehended, tried, and jailed to serve as deterrents?” He said.
We appreciate you for reading SalistitaVibes.Com, but we think it will be better you like our facebook fanpage and also follow us on twitter below.
Follow @OYEVIBES

0 Response to "We Are Ready For Negotiation - ASUU"